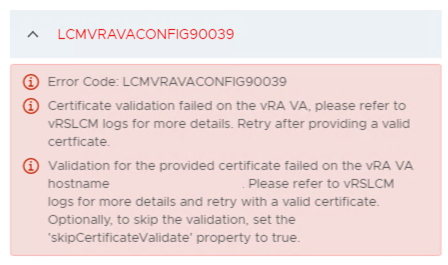 To have a better understanding of what went wrong I looked at the vmware_vrlcm.log file on the vRSLCM appliance. This log file contained below error message, indicating something is wrong with the encryption of the certificate.

The intermediate CA certificate however was using the unsupported SHA1WithRSAEncryption signature algorithm.

And also the root CA was using the unsupported SHA1WithRSAEncryption signature algorithm.

Unfortunately, at he time of publising this post, there is no VMware documentation nor KB article which describes the detailed vRA certificate requirements. Based on the vracli output following SHA2 algorithms are supported on the certificate chain.